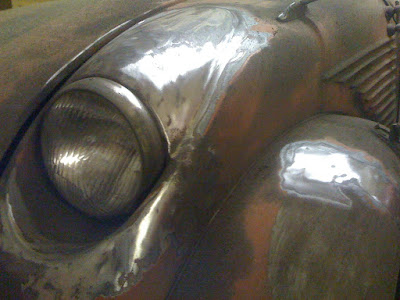 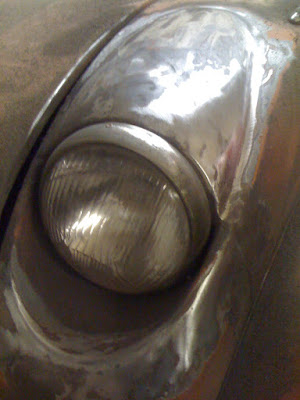 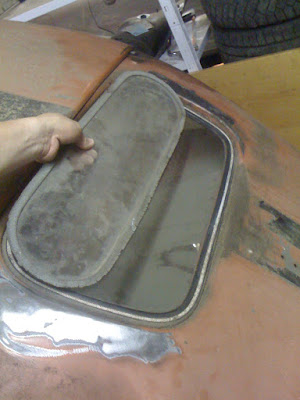 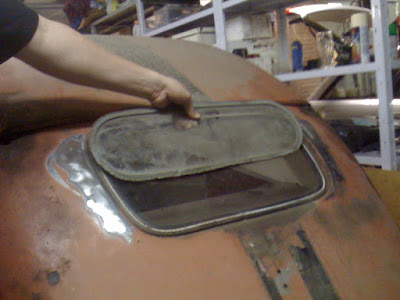 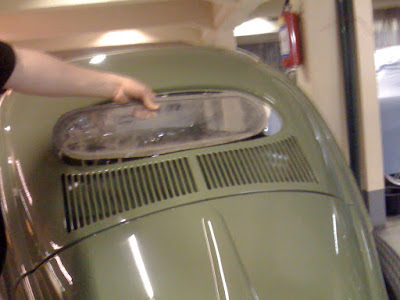 real steel from 1939, paint removal started... slowly. it would be cool to know the history of the rear window, every picture shows steyr 55´s with a small window, but this one has a big ugly window. still there was the original window inside of the car, as well some brakedrums. :-/
the car loks to have a really good body, but i would need a really good "tin-man" to fix everything... well i would need one also with the porsche. maybe ill ask from "kangasniemi - motorsport - center" ... like you see in the picks, the rear window is really small, even compared to the oval window bug... the new window looks like it has been stolen from a barndoor vw
Posted by jyrie at 3.24 Ei kommentteja: 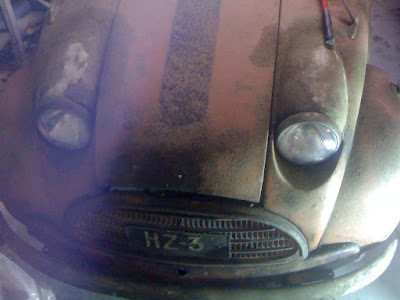 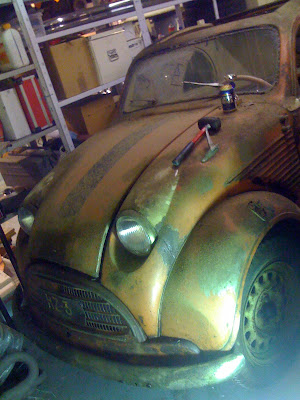 well the front looks like a toads face ...or a fish. but thats ok, have to keep it that way. the other still got the orignal face, but a bit more of rust. ;-) but you have to admire the ugliness, its pretty cute!
i hope to have some time to peel the paint off, the car would need some soda blasting or similar...
well whats the hurry, have to contact kangasniemi for some future plans... ;-)
Posted by jyrie at 9.19 Ei kommentteja: 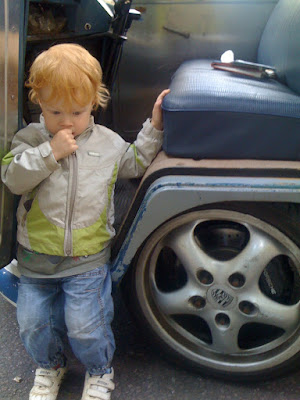 hard to decide, should i just drive the panel to the cottage to sleep for couple of months, or drive it to kangasniemi for a small repair/service...and maybe for a bigger and more powerfull engine? I KNOW THAT this engine is the best of the bunch, starts right up, goes well, wont even drink so much, well theres no bad things to say...ok, maybe i need the magical "100 hp more" ;-)
but then comes the bad parts, allways broken, brakes the tranny, needs lots of tuneup, etc...but it would be so coool to tease the tuned cars a bit more... got to think harder... i know that my co-driver will be sad anyway. :-( 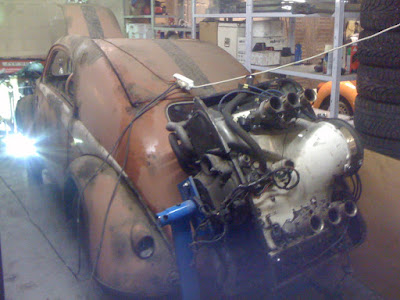 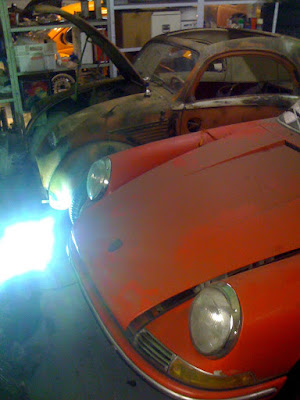 well, not a porsche six, but something crazy... later on that have to take measurements
Posted by jyrie at 6.24 3 kommenttia: 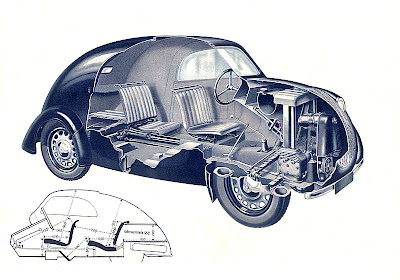 In 1937, Volkswagen began building prototypes of the KdF-wagen (what would later evolve into the Beetle.) It was Tatra's contention that Ledwinka's patented designs had been pirated by Volkswagen, and Tatra sued just prior to the opening salvos of World War II. Within months, Hitler resolved the patent dispute by taking over the Tatra facilities early in the war. T-97 production ceased.

The Nazi government occupied Czechoslovakia in 1938 and forced Ledwinka's office under military rule. For the next six years, Ledwinka's primary responsibility was to supervise the engineering and production of military vehicles. For his efforts under Nazi rule, the Communist-ruled post-war Czechoslovakian government imprisoned Ledwinka for his work during the war. He was interned for six years, until he was finally released in 1951, whereupon he returned to Vienna.

Ledwinka's son Erich was also imprisoned at the same time, but was granted an emigration permit in 1950. Upon returning to Vienna, the younger Ledwinka joined his father's old employer, now known as Steyr-Daimler-Puch (SDP) as a test engineer for engines and chassis. The elder Ledwinka came on with SDP as a consultant, where he worked with his son on the design of the Haflinger military vehicle.

In the years following the war, there were lawsuits regarding Volkswagen's patent infringement upon Ledwinka's designs for the T-97. The suits dragged on for more than a decade, finally ending in 1961 when Volkswagen paid a DM 3 million settlement to the heirs of Franz Ringhoffer, the former owner of Tatra-Werke, vindicating the claims that Ledwinka, not Ferdinand Porsche, was responsible for the overall design of the "people's car."
Posted by jyrie at 1.56 Ei kommentteja: 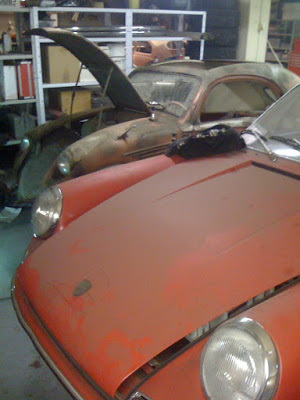 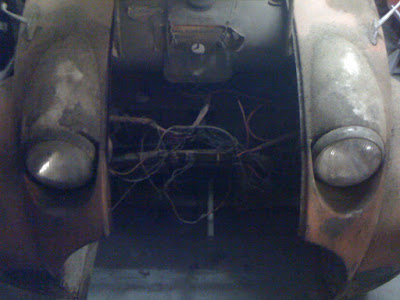 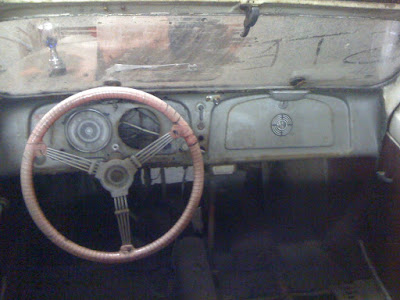 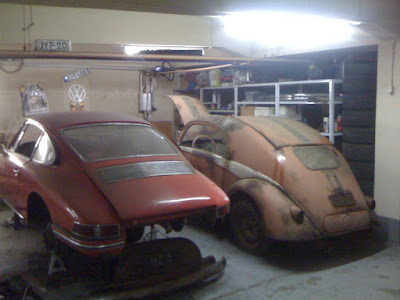 its a funny little car, and some customising done in finland...example, oval window taillights, bigger rear window, and the front grille, and a beetle bumper, but still, i have the original registration book etc. we also got the sliding sunroof working...
i had to take measurements...and yes, a porsche 912 engine could fit. but with what kind of a tranny?
any suggestions? if you have an idea, let me know... jyrie@mac.com
Posted by jyrie at 14.00 Ei kommentteja: 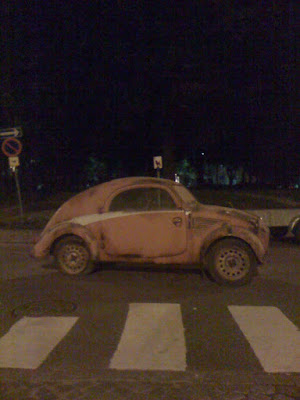 thanks to mikko "herr oberschlachter" heikkilä, i got the steyr to sepankatu, now i can start to fit different parts to it.
looks like a vw-four or porsche 4 banger could fit to the enginebay...and what else? ...we will see.
more picks to come...
Posted by jyrie at 14.23 Ei kommentteja: 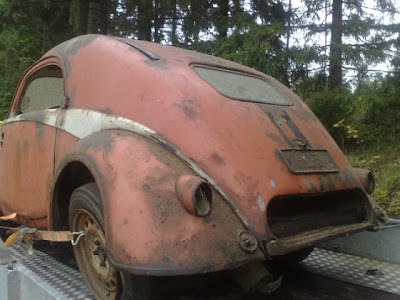 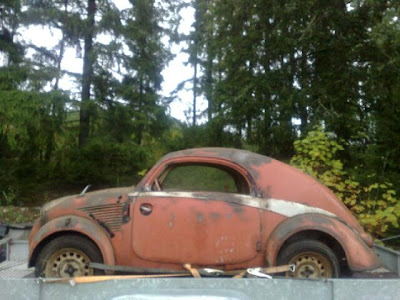 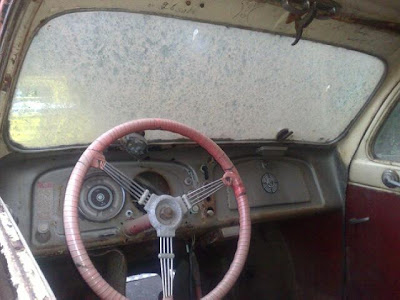 Posted by jyrie at 23.30 Ei kommentteja: Posted by jyrie at 23.27 Ei kommentteja: